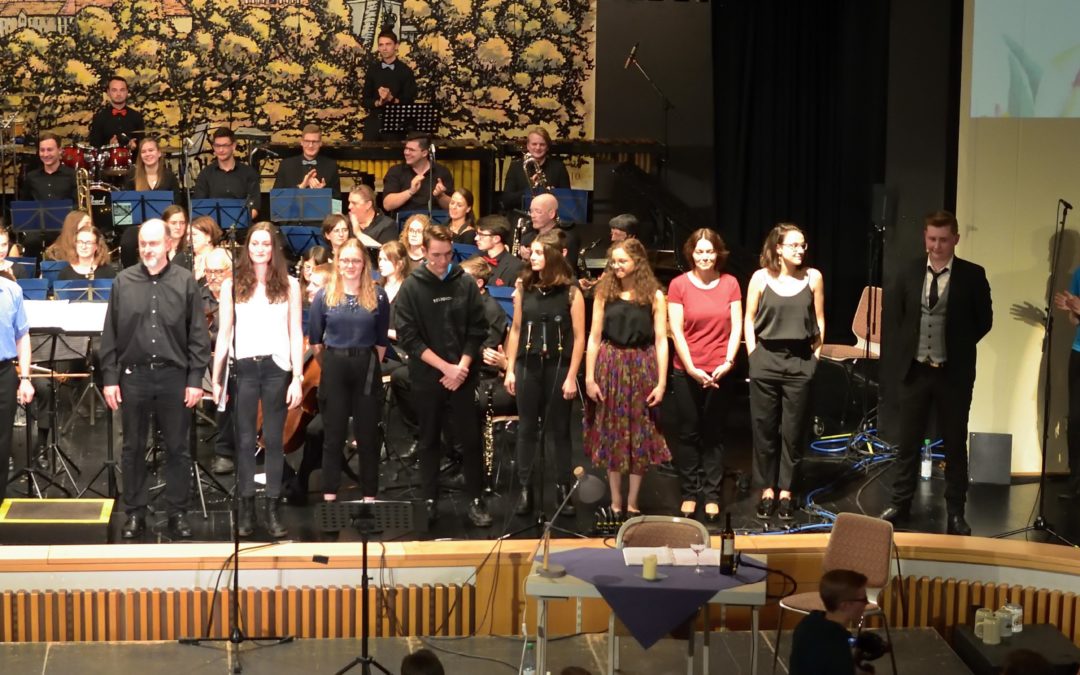 At November 3rd we hosted a concert, concluding a series of three workshop weekends in Hünfeld (Germany). In the first two workshops we primarily focussed on the personal development of each choir singer and soloist. But in this final weekend the concert and preparing for it, were the main topics. It resulted in a terrific and impressive concert by more than 100 participants in a sold out Kolpinghaus.

The Project Choir just before and during a concert

In the workshop weekends leading up to the concert, we spent much time on choral blending. But in this last weekend it was time to shift our focus toward story telling. What does this choir arrangement want to tell the audience? The vocal coach became conductor, took initiative as a leader, to build one story, told by choir, soloists and orchestra. Coach and conductor were one and the same person, in our case, so switching between the two roles wasn’t hard. The choir (consisting of singers from 8 to 30 years old) had a pretty good idea of their role in the whole production, thanks to the rehearsal weekends in june and september. There was no problem at all merging the three different groups. My compliments fort he professionalism, even from the very young! We were proud of the result: This was a very high level of choral singing!

Coaching soloists just before and during a concert

There has been intensive coaching with all the solists in the first two weekends. Some of them were able to continue their preparations independantly, others used the advantages of modern internet technique to get in touch with their coach on a more regular basis. In a concert situation the soloist has to be autonomous and self supporting during the full length of the performance.

We invested time though to work on microphone technique. It is not always obvious how to work with a microphone (especially with classically trained singers). And singing with an accompanying wind orchestra also needs some getting used to. In many circumstances you are in the hands of the sound engineer and you hope it’s a good one. We were happy to have Gerardo Grusso, WDR big-band sound engineer, to assist, help and teach the young, local sound engineers. They did a great job on the sound and had the whole complex sound system under control. A big round of applause for the soloists (and the sound engineers!!).

Coach/Conductor shortly before and during a concert

Being a vocal coach I had worked a lot on vocal technique and the musical aspects of the music we rehearsed. In this last weekend towards the concert building confidence is a strong issue. Much time was invested in merging the different musical components. Choir singers and soloists should be convinced that the concert will be great and that the part they have in the concert is of great importance. When everyone keeps that vision in mind, having a great concert, my coaching goals are met.

So, ladies and gentlemen, thank you for a fantastic concert and a superb weekend.